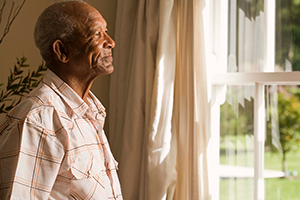 When it comes to Alzheimer’s the precise number of stages is somewhat arbitrary. Some experts use a simple three-phase model (early, moderate and end), while others have found a granular breakdown to be a more useful aid to understanding the progression of the illness.

The 7 Stages of Alzheimer’s Disease

Here is summary of the seven stages of Alzheimer’s disease based on the ideas of Dr. Resiberg:

Stage 1: No Impairment
During this stage, Alzheimer’s disease is not detectable and no memory problems or other symptoms of dementia are evident.

Stage 2: Very Mild Decline
The senior may notice minor memory problems or lose things around the house, although not to the point where the memory loss can easily be distinguished from normal age related memory loss. The person will still do well on memory tests and the disease is unlikely to be detected by physicians or loved ones.

Patients in stage 3 will have difficulty in many areas including:

-Have difficulty with simple arithmetic
-May forget details about their life histories
-Have poor short term memory (may not recall what they ate for breakfast, for example)
-Inability to manage finance and pay bills

Stage 5: Moderately Severe Decline
During the fifth stage of Alzheimer’s, patients begin to need help with many day to day activities. People in stage five of the disease may experience:

-Significant confusion
-Inability to recall simple details about themselves such as their own phone number
-Difficulty dressing appropriately
-On the other hand, patients in stage five maintain a modicum of functionality. They typically can still bathe and toilet independently. They also usually still know their family members and some detail about their personal histories, especially their childhood and youth.

Stages 7: Very Severe Decline
Stage seven is the final stage of Alzheimer’s disease. In stage seven of the disease, patients lose ability to respond to their environment or communicate. While they may still be able to utter words and phrases, they have no insight into their condition and need assistance with all activities of daily living. In the final stages of the illness, patients may lose their ability to swallow.